By NATASHA ANDERSON FOR DAILYMAIL.COM

Pfizer has 73 formalized deals for its COVID-19 vaccine but of those, only five have been formally published by governments and include ‘significant redactions,’ Public Citizen found.

The seven known contracts reviewed by Public Citizen are worth more than $5 billion.

The report accuses Pfizer of including secret language blocking donations of its own doses, opposing an intellectual property waiver that could have allowed for the sharing of technology, having ‘unilateral authority for other decisions’ and more.

Pfizer’s COVID-19 vaccine – the first to receive emergency use authorization in the U.S. – has become the most popular worldwide, with 3.5 billion doses purchased. 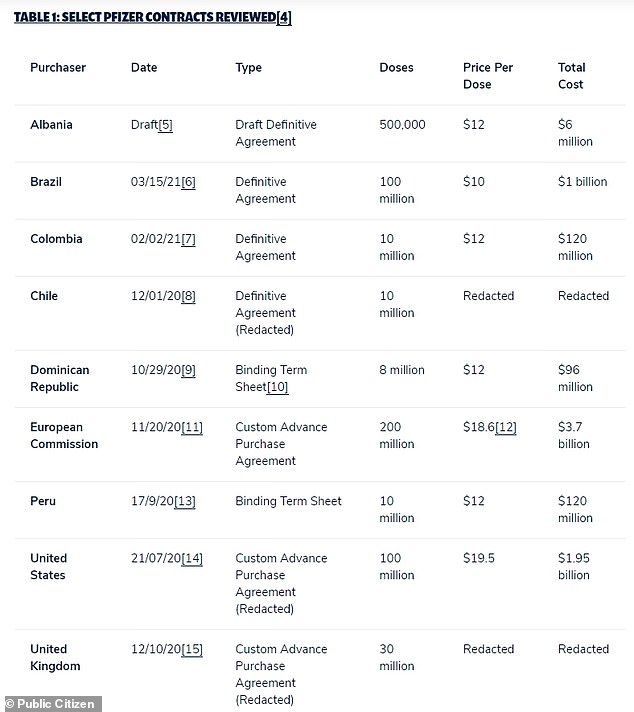 Pfizer has 73 formalized deals for its COVID-19 vaccine but of those contracts, only five have been formally published by governments and are heavily redacted. The known contracts are worth $5 billion and were reviewed by Public Citizen, which outlined its findings (pictured)

Experts predict its sales to double in 2022, the Washington Post reported.

Due to the fact that information in several contracts remains redacted, it is unknown exactly what the total cost of all agreements are.

Experts allege that secret contracts poises risks to others.

‘Hiding contracts from public view or publishing documents filled with redacted text means we don’t know how or when vaccines will arrive, what happens if things go wrong and the level of financial risk buyers are absorbing,’ Tom Wright, research manager at the Transparency International Health Program, said.

‘The contracts offer a rare glimpse into the power one pharmaceutical corporation has gained to silence governments, throttle supply, shift risk and maximize profits in the worst public health crisis in a century,’ the group’s report alleges.

Contract experts, who reportedly analyzed the leaked documents, claim that Pfizer uses ‘unfair and abusive’ contractual terms in negotiations that give them the right to silence governments. 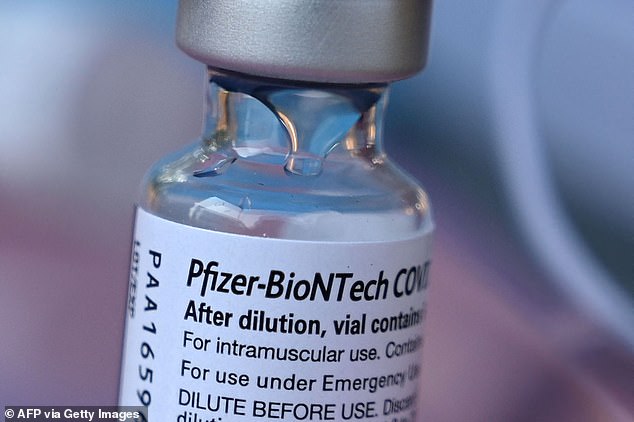 The report accuses Pfizer of including secret language blocking donations of Pfizer doses (pictured), opposing an intellectual property waiver that could have allowed for the sharing of technology, having ‘unilateral authority for other decisions’ and more

Certain contracts, including one between Pfizer and Brazil, prohibits the government from making ‘any public announcement concerning the existence, subject matter or terms of [the] Agreement’ or commenting on its relationship with Pfizer without written consent from the company.

Similar terminology is found in the US and European contracts, however the terms apply to both parties.

Sharon Castillo, a spokeswoman for Pfizer, told the newspaper that ‘confidentiality clauses were ‘standard in commercial contracts’ and ‘intended to help build trust between the parties, as well as protect the confidential commercial information exchanged during negotiations and included in final contracts.’

The group also accuses Pfizer of controlling supply of their vaccine.

Public Citizen claims the Brazilian government is restricted from accepting Pfizer vaccine donations from other countries or buying vaccines from others without Pfizer’s permission.

The country is also restricted from donating, distributing, exporting or otherwise transporting the vaccine outside Brazil without Pfizer’s consent.

In at least four contracts, Pfizer has the right to use anyone’s intellectual property with consequence, according to the report.

These countries are also required to cover legal expenses if another vaccine maker sued Pfizer for patent infringement in their country. 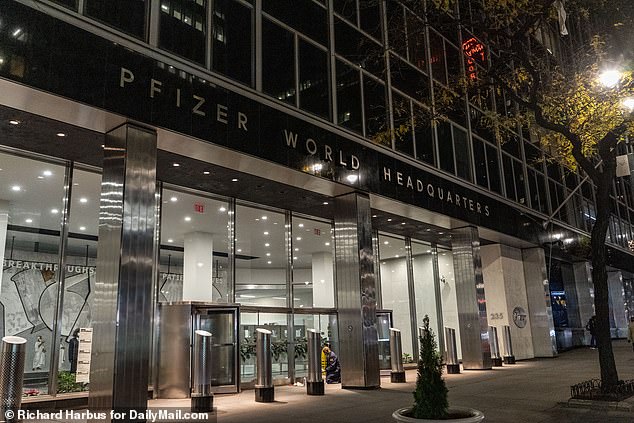 Additionally, the company requires that all disputes be decided through private arbitration, not public courts.

The existence of arbitration, arbitral proceedings, submissions made by all involved parties and decisions made during the process are expected to remain private.

Several contracts state that the government involved ‘expressly and irrevocably waives immunity which either it or its assets may have or acquire in the future’. This includes ‘immunity against precautionary seizure of any of its assets.’

‘It’s almost as if the company would ask the United States to put the Grand Canyon as collateral,’ said Lawrence Gostin, Georgetown University professor of public health law, commenting to the Washington Post on the ‘extreme’ clause.

However, Pfizer rejected the claim, saying: ‘Pfizer has not interfered and has absolutely no intention of interfering with any country’s diplomatic, military, or culturally significant assets. To suggest anything to the contrary is irresponsible and misleading.’ 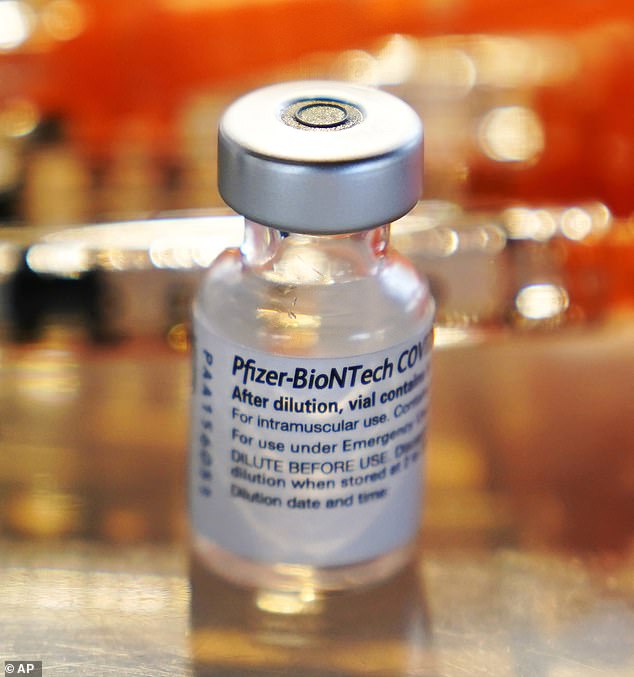 Pfizer’s COVID-19 vaccine – the first to receive emergency use authorization in the US – has become the most popular worldwide, with 3.5 billion doses purchased. Experts predict sales to double in 2022

Lastly, Public Citizen argues that Pfizer maintains the right to make all key decisions. They claim the company requires governments to give them ‘sole discretion’ when it comes to vaccine decisions.

‘What happens if there are vaccine supply shortages?,’ the report reads. ‘In the Albania draft contract and the Brazil and Colombia agreement, Pfizer will decide adjustments to the delivery schedule based on principles the corporation will decide. Albania, Brazil, and Colombia ‘shall be deemed to agree to any revision.’

Public Citizen has called on the US government to ‘use its leverage’ to force Pfizer into taking different contractual approaches.

‘The global community cannot allow pharmaceutical corporations to keep calling the shots,’ Zain Rizvi, the researcher who wrote the report, told the Washington Post.  ‘The Biden administration can step up and balance the scales.’

Pfizer did not immediately respond to DailyMail.com’s request for comment.

For anyone wondering what the elites at the World Economic Forum are cooking up for the next 2 years you don’t have to wonder what they are :