Premier Mark McGowan said statewide restrictions on the un-jabbed would commence on January 31, introducing ‘the broadest proof of vaccination requirements in the nation.’ 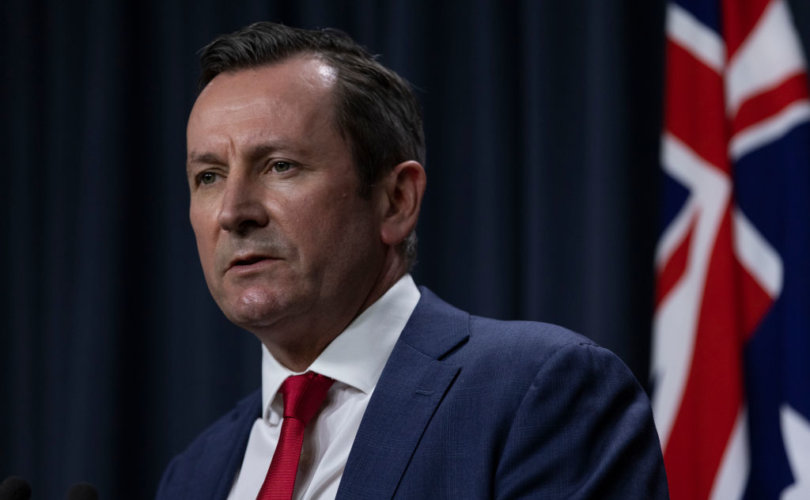 PERTH, Australia (LifeSiteNews) – The government of Western Australia (WA) has announced a raft of restrictive new coronavirus measures, barring those who have not received two doses of a COVID-19 shot from most public settings and warning the un-jabbed that the rules “will not be removed any time soon.”

In a January 13 announcement, Premier Mark McGowan unveiled that extensive statewide restrictions on the un-jabbed would commence on January 31, introducing “the broadest proof of vaccination requirements in the nation.”

Unblock video DuckDuckGo blocked this Facebook video We blocked Facebook from tracking you when the page loaded. If you unblock this video, Facebook will know your activity. Learn More Unblock video

The premier said that utilizing “wide-ranging proof of vaccination requirements” will help to curb the spread of COVID-19 since “we have seen [it] work in other jurisdictions.”

McGowan’s assertion sharply contradicts data out of several countries that have introduced vaccine passes, like the U.K., which earlier this month reported record infections and higher COVID rates among vaccinated people in all age groups over 18 years old. The vaccinated have likewise come to dominate COVID hospitalizations and deaths in the U.K. and other highly vaccinated European nations, as well as parts of the United States.

Leading medical experts have also warned of serious injuries linked to the injections. The spike proteins in mRNA COVID vaccines, like those produced by Moderna and Pfizer, are “pathogenic” and “lethal to some,” Texas cardiologist and COVID-19 expert Dr. Peter McCullough lamented last fall.

He noted that autoimmune conditions may directly result from the jabs, echoing experts like Dr. Geert Vanden Bossche and former Pfizer vice president Dr. Mike Yeadon. “So, in the most kind of perverted way, it’s hard to say this, but the vaccine is, in a sense, giving people a dose of a product of bioterrorism, by injection,” McCullough said.

The introduction of the punishing and coercive measures in Western Australia comes despite some 94.4 percent of over 12s in the region having received their first dose of the shots and 87 percent already having taken the second. 18.1 percent of the eligible population had taken a third booster before the announcement. Research has shown that the vaccines cause greater harm than the virus particularly for younger age groups and young men, who have a heightened risk of potentially fatal heart inflammation after the jabs.

Western Australia had already employed a proof of COVID shot status requirement within its borders for what was deemed “higher risk venues and events,” including gatherings where large numbers of people could crowd, such as music festivals.

Now, McGowan said “we will be expanding proof of vaccination requirements to a wider range of venues.”

“Effective Monday, January 31,” he continued, “we will be expanding proof of vaccination requirements.” The list of places unavailable to those who decide to forego inoculation will include public and private hospitals and aged-care facilities, restaurants, cafes, bars, pubs, clubs, taverns, nightclubs, dine-in fast food, and “all hospitality venues.”

“Roadhouses, service stations and take away are exempt,” he stated.

In addition, any hope of the un-jabbed being permitted to entertainment venues was quickly quashed as McGowan announced that “playcentres, gaming and gambling, theatres, concert halls, museums, cinemas, and live music venues” will be out of bounds for such people.

Entrance into liquor stores, major stadiums, gyms, fitness centers and health studios will also be reserved to the double-jabbed alone, as well as amusement parks, zoos, and “the entire Crown Perth complex,” a large luxury resort in the region’s capital. Proof of being double-jabbed will be required for anyone aged 16 and over.

“Life will become very difficult for the unvaccinated … no pubs, no bottle-shops, no gym, no yoga classes, no gigs, no dancefloors, no hospital or aged care visits,” the politician declared.

Proof of one’s “vaccine status” will be accepted through a government-developed app which displays a digital “certificate” of the bearer’s “vaccine” status, or with a paper version in concert with government-issued identification. McGowan made efforts to promote the app by explaining that no separate identification documentation is necessary if using the app to prove one’s status.

As things stand, to be considered “fully vaccinated,” Western Australians must prove they have received two doses of a government-approved COVID jab; however, McGowan suggested that this will not last long, as more citizens are being encouraged to take up the booster.

“Our expectation is that in order to be fully vaccinated, the Commonwealth rules will say three doses, and once that happens, we will move to the three-dose rule in due course,” he said.

The premier, who leads the state’s center-left Labor Party, explained that the measures have been implemented as part of a statewide plan to help citizens feel “confident in these public settings, and that they are only mixing with other vaccinated people,” whom he claimed are “less likely to be carrying or able to pass on the disease.”

He added that reserving the use of public places to only the double-jabbed “reduces the risks posed by unvaccinated people, bringing the virus into busy populated settings.”

Coronavirus jab trials have never produced evidence that the vaccines stop infection or transmission. They do not even purport to reduce hospitalization, but measure success in preventing severe symptoms of COVID-19 disease. Moreover, there is strong evidence that the “vaccinated” are just as likely to carry and transmit the virus as the un-jabbed.

Last year, the premier introduced the country’s most expansive COVID jab mandate for employees, announcing a requirement for 75 percent of the state’s workforce, over 1 million people, to have received the shot by the end of this month or face losing their job.

“Employers will be required to keep a record of the evidence, and authorized officers will run spot checks to ensure compliance is occurring,” McGowan said, warning that “employers that have unvaccinated staff working after the deadline run the risk of being fined up to $100,000.”

Australian legal expert Dr. Rocco Loiacono told LifeSiteNews at the time that the new radical public health orders can be understood as McGowan’s attempt to conceal his “incompetent leadership” by “deferring to authoritarianism.”