New powers will allow Premier Dan Andrews to impose a state of emergency any time he likes – and Victorians face $90,000 fines or two years in jail if they protest.

Under the legislation, opposition MPs fear the premier could use public health orders to target individuals on age, gender, sexual orientation, political belief, or activity.

Health minister Martin Foley insisted the new legislation was designed to be transparent, but it was savaged by the opposition as ‘an attack on democracy’.

Under the new bill, the premier will be able to declare a pandemic even if there are no cases, and can extend the state of emergency for three months at a time.

The sweeping new pandemic laws which were tabled in parliament on Tuesday free the premier from having to get doctors to sign off on public health orders. 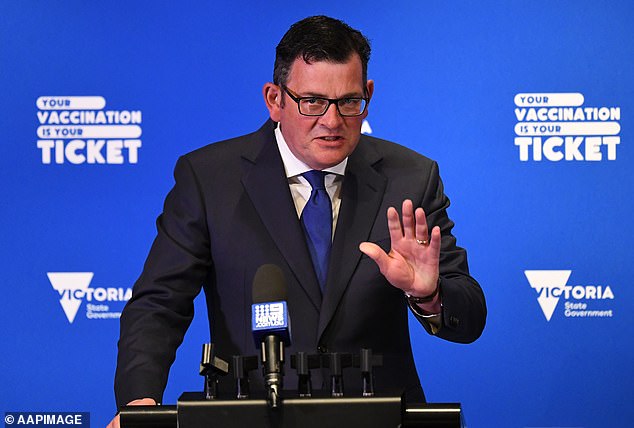 New powers will allow Premier Dan Andrews (pictured) to impose a state of emergency any time he likes – and Victorians face $90,500 fines or two years in jail if they protest 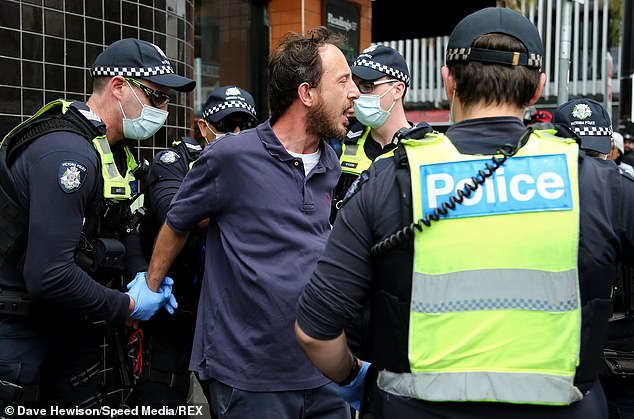 The dramatic escalation of the premier’s powers have come under fire from the state’s Opposition who branded Mr Andrews ‘drunk on power’. (Pictured, a protester seized by police in Melbourne on Saturday)

And the premier would be able to declare a state of emergency and bring in new restrictions on public life whether or not his chief health officer agrees.

The premier would also make the final call on implementing lockdowns, mask mandates and quarantine requirements.

Victorians could be fined up to $90,000 or jailed for two years if they breach health orders and knew – ‘or should have known’ – they were putting others at serious health risk, while companies face fines of up to $455,000.

Legal experts have warned the new bill does not have a sliding scale of crimes and treats all breaches with the same seriousness, raising concerns some could face a jail term for minor breaches like not wearing a mask.

But Mr Foley insisted every incident would be judged for its own seriousness.

‘Each case would have to be determined on its merits by an appropriate judicial officer,’ he said.

‘It is a very high benchmark and it’s for the most egregious and deliberate offences that cause significant public harm.’

The dramatic escalation of the premier’s powers came under fire from the state opposition, which branded Mr Andrews ‘drunk on power’.

‘Victorians are today witnessing the most extreme, dangerous and excessive laws ever brought before our state,’ Liberal leader Matthew Guy said. 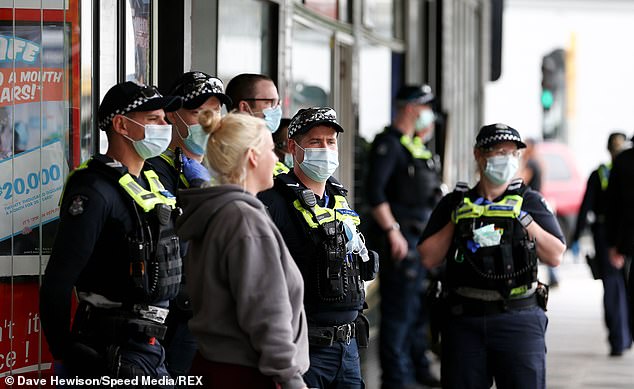 Under the rewritten fines law, individuals could be fined up to $90,500 if they break the rules, with companies facing fines of up to $452,500. (Pictured, Victoria Police on lockdown patrol)

‘Daniel Andrews is attempting to sideline the Victorian chief health officer and grant himself unchecked power.

‘Why would the government pass such extreme legislation if they didn’t intend to lock us down again?

‘This is the most extreme law of its kind anywhere in Australia.

‘We see these laws as an incredible attack on democracy.’

Mr Andrews dismissed the criticism as ‘political games’ and insisted the powers were simply those that the opposition had been calling for.

‘In many ways, in terms of scrutiny, oversight, transparency, they are the right set of arrangements,’ he said.

‘There’s been widespread consultation with experts in many different field.

‘It’s important that we learn from the experience, and that we have the best set of arrangements in place for this next phase [of] living with COVID, and for the normalisation of this virus.

‘We need specific [pandemic] laws… that will protect us and keep us safe. That was our commitment, and that’s what we have delivered.’

The new process is similar to the ones used in NSW and New Zealand, where the health minister is directly accountable to parliament.

Mr Andrews said Mr Guy repeatedly called for the public health orders to be made by elected officials rather than bureaucrats. 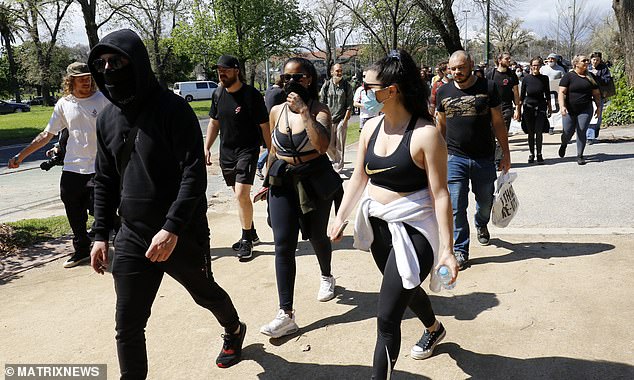 Dan Andrews dismissed the criticism ‘political games’ and insisted the powers were simply those that the Opposition had been calling for. (Pictured, lockdown protestors in Melbourne) 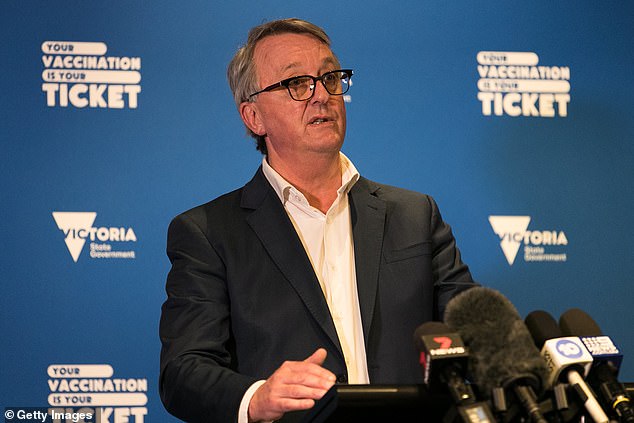 Health Minister Martin Foley (pictured) said the laws would allow him to issue health orders based on characteristics such as age, location, vaccination status and occupation

As recently as October 5, Mr Guy said the orders should be ‘ticked off by a minister or the premier’.

‘This is exactly what the opposition leader asked for. Now apparently it’s not the right thing,’ Mr Andrews said on Tuesday.

‘There’s some political game being played here and I just won’t get involved in that.’

But Mr Guy denied the laws’ similarities with the NSW system and begged Labor MPs and crossbenchers to block the bill in Parliament.

‘We do not support handing over everything, our rights, our liberties, everything to one person to the premier of the state,’ he said.

‘I know we don’t always agree. I know we’re on different political ideologies, but for goodness sake, stand up and oppose this legislation.

‘Whether you are of the parliamentary left or right or centre or whatever, please oppose this legislation. To all MPs, please stand up for Victorians.

‘There are sensible members of the Labor Party but to support legislation like this will be unprecedented.

‘Please don’t let your leader unleash this kind of will upon the start. It will be very difficult to wind back.’

Premier can declare a pandemic if he just fears there s the potential of one, and without the agreement of the Chief Health Officer.

The initial pandemic declaration can only last four weeks at a time but can be extended for up to three months at a time.

Premier must justify pandemic declaration to parliament and supply the CHO’s advice.

After declaring a pandemic the health minister ‘can make any order the Minister believes is reasonably necessary to protect public health.’

If people refuse to be tested to medically examined, they can be detained longer.

The laws would then allow people to be targeted by geography, age, gender, race, sex or even sexuality.

Health minister Foley said the laws would allow him to issue health orders based on characteristics such as age, location, vaccination status and occupation.

But he said it was ‘conspiratorial nonsense’ for the opposition to suggest rules could be enforced based on gender, sexual orientation or political belief. 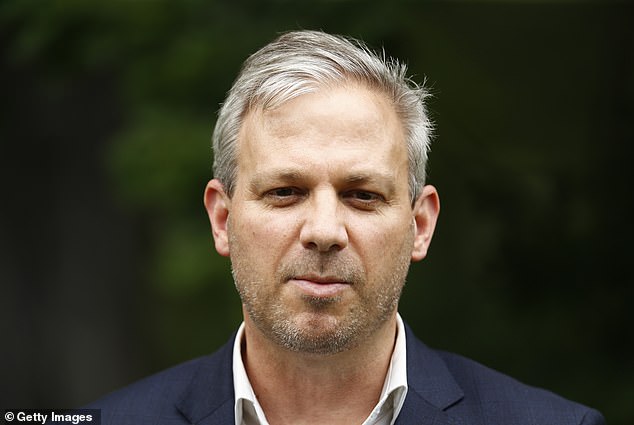 Chief health officer Brett Sutton also insisted he was not being ‘sidelined’ by the laws.

‘There are expectations that the elected representatives in parliament, the minister in particular and the premier, should have accountability for the final form that public health directions take,’ he said.

Professor Sutton will continue to provide health advice to the minister, which under the new laws must be tabled in parliament then made public.

An independent oversight committee will be established to review the public orders and their impact on human rights.

The laws also introduce safeguards around protecting contact tracing and QR code information, while an aggravated offence will be created for people or businesses who ‘intentionally or recklessly breach’ the rules. 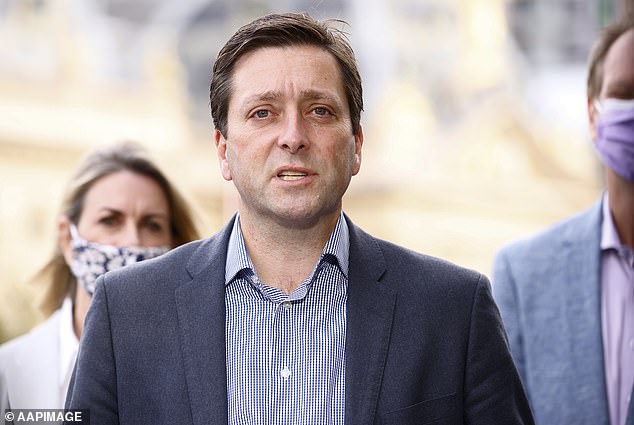 The bill is expected to pass the lower house but in the upper house it will require the backing of three of the 11 crossbenchers.

Animal Justice MP Andy Meddick and Greens leader Samantha Ratnam have indicated they will support the bill, while Reason Party MP Fiona Patten wants to see the ‘devil in the detail’ before giving it a final ‘thumbs up’.

If passed, pandemic-specific laws will replace the current state of emergency, which expires on December 15.

Victoria recorded 1510 new Covid-19 cases and four deaths on Tuesday, bringing the toll from the state’s latest outbreak to 234.

About 90.8 per cent of Victorians aged over 16 have had one Covid-19 vaccine dose while almost 76 per cent are fully vaccinated, paving the way for restrictions to ease further at 6pm on Friday.

One thought on “Dan Andrews power grab: Victorians could be fined up to $90,000 and jailed for TWO YEARS just for not wearing a mask or protesting lockdown under law that allows him to invoke pandemic restrictions at will”