As over 10,000 new cases are diagnosed, Nachman Ash tells lawmakers he had hoped recent downward trend would continue

Health Ministry Director-General Nachman Ash said Tuesday that the current wave of coronavirus infections is surpassing anything seen in previous outbreaks and that he is disappointed that a recent downward trend appeared to be reversing.

Ash’s remarks via video call to the Knesset Constitution, Law, and Justice Committee came as Health Ministry figures showed that over 10,000 new COVID-19 cases were diagnosed the day before and that the positive test rate was climbing.

Pointing out that there is an average of 8,000 new infections each day, with occasional peaks over 10,000, he said, “That is a record that did not exist in the previous waves,” including the massive third wave at the end of last year.

Ash expressed some pessimism, though he observed that, belying fears, there wasn’t a large spike in infections following last week’s Rosh Hashanah holiday — the Jewish New Year — or the opening of the school year at the beginning of the month.

After bringing daily infections down to little more than a dozen a day in June, Israel has been battling to control a resurgence of COVID-19 in what has been its fourth wave of infections since the start of the global pandemic.Get The Times of Israel’s Daily Editionby email and never miss our top storiesNewsletter email addressGET ITBy signing up, you agree to the terms

“A week ago we were in a clear downward trend; in recent days we’ve been seeing that decline stop, and the virus reproduction number is [again] above 1,” Ash said of the so-called R number, which indicates how many people each virus carrier will infect. Values above 1 show that the outbreak is growing, below 1 that it is shrinking.

“I hoped that we would see a clearer drop, but we are still not seeing it,” he said.

Ash noted the number of seriously ill ranges between 670 and 700. Every day 70-80 new patients fall seriously ill, slightly fewer than in recent weeks.

The number of patients on ventilators has climbed in the past ten days from 150 to 190, while the number of those on the more critical ECMO machines rose from 23 to 31, he said.

Despite the numbers, Ash said that the so-called Green Pass restriction would be removed from open-air swimming pools, in part to help out parents searching for activities for their children during the holiday period when schools are closed. The holiday period, including the weeklong Sukkot festival, ends September 28.

The Green Pass enables only those who have been vaccinated against COVID-19, recovered from the disease, or recently tested negative for the virus to access most indoor public places, as well as crowded outdoor attractions. Since children below the age of 12 are not eligible for vaccination, they — if they’re over the age of 3 —  must get rapid virus tests to attend many recreation venues.

The Knesset meeting was convened to discuss the Green Pass system.

National coronavirus czar Salman Zarka, who also participated in the meeting, said that 50 percent of confirmed cases on Monday were children. He said that the Health Ministry was working on the assumption that it will in the future need to deal with a fifth wave of virus infections.

Zarka said that the ministry will prepare by continuing to use the Green Pass system, asserting that it helps prevent the virus spread, while noting that it would be eased as morbidity drops off.

“I hope that we will pass the month of September and stabilize in October,” Zarka said. “Then we will take a fresh look at the policy.” 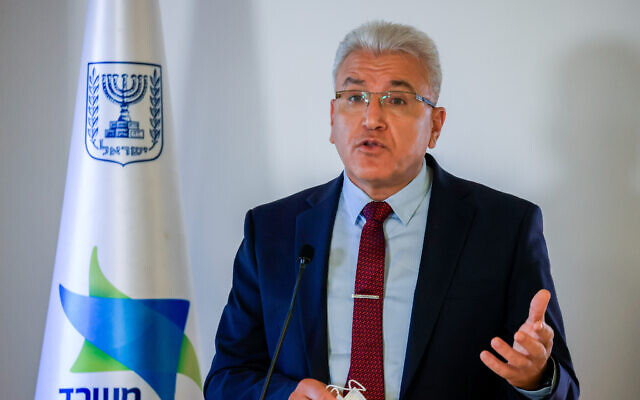 Zarka said the ministry had urged the government to restrict large gatherings and ban events such as a major student festival in Eilat, crowds at soccer matches, and an annual pilgrimage by tens of thousands of Israelis to Uman, Ukraine, to visit the grave of a venerated rabbi. Officials feared that hundreds of pilgrims would return with the virus. Dozens of infected travelers have been caught with forged paperwork declaring they tested negative for COVID-19 before boarding planes home.

“The cabinet sees things differently from us and decided that the events can be held,” Zarka said.

Health Ministry figures released Tuesday showed there were 10,556 new cases diagnosed the day before and 690 patients seriously ill with COVID-19.

In total there were 83,952 active virus patients in the country. With the death of 18 people on Tuesday, the toll since the start of the pandemic last year reached 7,297.

The virus reproduction number, which is calculated to show the situation ten days earlier, was given as 1.01 for September 3. After weeks of steadily dropping, the “R rate” began to tick up again two weeks ago.

On Sunday, several ministers were overheard prior to a cabinet meeting saying that some coronavirus-related restrictions were only aimed at incentivizing vaccination, rather than driving down morbidity.