By JOE DAVIES and DAN SALES FOR MAILONLINE

NHS workers furiously hit out against ‘blunt instrument’ plans to make Covid jabs for staff compulsory by winter, despite the vast majority of medics already immunised.

Top doctors and health service unions warned the policy could push out key staff ‘at a time we can least afford it’ and lead to discrimination.

The Government today launched a six-week consultation into plans to make vaccination a legal requirement to work with NHS patients.

Yet figures show 88 per cent of NHS staff are fully vaccinated and around 92 per cent have had a first dose, despite being first offered a jab last December.

The numbers are slightly lower in London, where there has been more hesitancy about vaccination, with only 86 per cent have had a first jab. There are about 1.2million frontline staff in the health service in England.

Under the plans, around 120,000 frontline NHS staff who are still not vaccinated could be required by law to be jabbed to reduce transmission in hospitals.

President of the hospital doctors’ union the HCSA Dr Claudia Paoloni said using the ‘blunt instrument of compulsion rather than persuasion’ will put off hesitant key workers.

The Royal College of Nursing (RCN) expressed hostility at the plans too, and raised doubts that the plans would even increase uptake.

And the NHS Confederation — which represents NHS trusts across England — said ‘the focus must remain on increasing vaccine confidence’ rather than forcing staff to take jabs.

A member of the Joint Committee for Vaccination and Immunisation (JCVI) — an independent body that advises the Government on vaccine policy — today said making jabs mandatory would feel ‘like an admission of failure’. 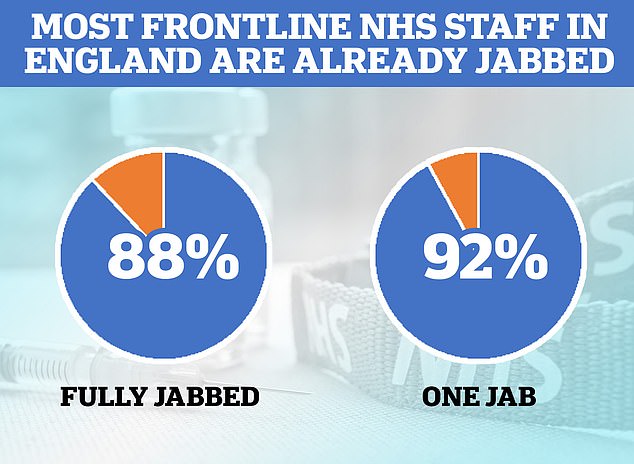 Figures show around 92 per cent of NHS trust staff have received one dose of a vaccine, with 88 per cent of staff having received both doses. The figures are lower in London, where only 86 per cent have had a first jab 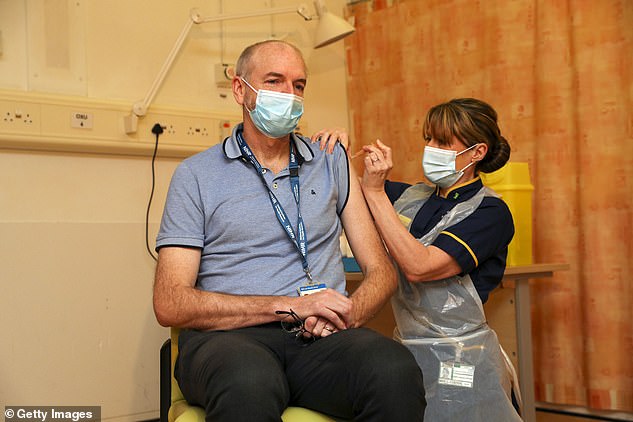 The Government today launched a six-week consultation into plans to make vaccination a legal requirement to work with NHS patients. Pictured: Professor NHS consultant Andrew Pollard, director of the Oxford Vaccine Group who helped develop the Oxford-AstraZeneca vaccine, receiving a jab in January 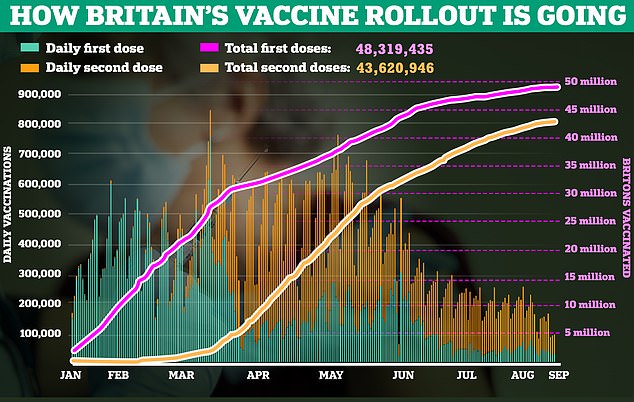 Uptake among health workers is slightly less than the national average for over-18s in England, with 88.5 per cent having taken up the offer of a first dose.

Those who refuse the jab could be barred from working with patients, meaning that they will likely be redeployed or risk losing their jobs. Social Care Minister Helen Whately today said staff who reject the vaccine could be moved back to office roles.

But NHS bosses fear it could trigger a staffing crisis, hampering efforts to tackle the enormous care backlog. They warned it could be discriminatory.

A study in the BMJ in February found rates among ethnic minority doctors and healthcare staff were significantly lower than rates among white staff.

The plans would also require NHS staff to be vaccinated against the flu, amid warnings that the UK will be hit with a bad bout this winter due to a lack of natural immunity.

It would bring the NHS in line with the care sector, where staff working in elderly care homes are required to be fully vaccinated against Covid.

The Government announced vaccinations will be compulsory for all care workers from November 11, despite warnings that tens of thousands of carers could leave the profession as a result.And unions have hit out at plans to extend the policy to all NHS staff this winter.HCSA boss Dr Paoloni said: ‘Our concern is that using the blunt instrument of compulsion rather than persuasion to ensure staff are vaccinated we could risk pushing out key NHS staff at a time when we can least afford it.’

The government itself acknowledges the variance in vaccine take-up between employers ranging from 74 to 94 percent. We know that many hospitals have been extremely successful in persuading apprehensive staff to be vaccinated.’We encourage all NHS staff to be vaccinated but this is one part of a much bigger equation. ‘Covid vaccination rates in the NHS have been high for a large part of the pandemic, but experience shows we also need measures to limit transmission in the community, maintain tough infection control in hospitals and provide adequate levels of PPE and regular testing for staff.’

The RCN pushed back against the plans, arguing the majority of staff ‘accept the vaccine’ and the Government’s focus should be on communicating the benefits of jabs, not forcing them into people’s arms.Helen Donovan, professional lead for public health, said: ‘All nursing staff should have any vaccine deemed necessary to help protect themselves, patients, colleagues, family members, and the wider community. ‘

This has always included the flu vaccine and more recently the Covid vaccine.’We do, however, have concerns around mandating vaccines and whether this will ultimately improve uptake.’

The majority of all nursing staff accept vaccination, the Department of Health and Social Care’s own figures show 92 per cent of NHS staff have had their first dose and 88 per cent both doses of the Covid vaccine.’The focus should be on communicating the benefits of vaccination rather than making them mandatory.’Involving staff in this consultation will help them to become further involved in the decision making and it is vital their views are properly taken into account over the next steps.’

The NHS Confederation argued that compulsory vaccination is unnecessary because NHS staff are ‘overwhelmingly doing the right thing’. Matthew Taylor, the body’s chief executive, said: ‘NHS organisations have been working hard to encourage uptake of the vaccination among all eligible members of the workforce and will continue to do so, especially with members of staff in groups where uptake is lower. ‘

As it stands, the vast majority of NHS staff have already chosen to be vaccinated, and the important thing is to make sure those who have yet to be vaccinated are supported to do so.’

Members will continue to emphasise education and communication with staff, which will be crucial even if the government mandates vaccination for NHS staff.’He continued: ‘We will also work closely with our trade union colleagues to address the concerns of their members and to ensure that the implementation of any decision is handled sensitively.’

We will need to understand the detail of the proposals, but the focus must remain on increasing vaccine confidence and the approach taken to date to encourage uptake through informed consent remains the preferred option.’Mrs Whately said there were people who could not have the vaccine for medical reasons but those who decline the jab could lose their frontline jobs. 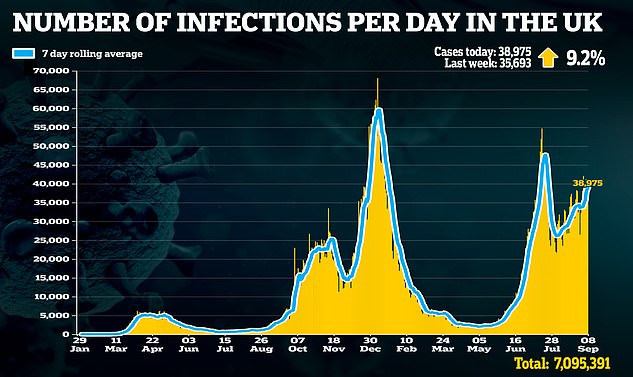 ‘So we could look at alternative roles for individuals, these are exactly the sorts of things that we can investigate.’

Professor Finn, a professor of paediatrics at the University of Bristol, said: ‘It’s a kind of an admission of failure.

‘It’s like saying you can’t either find the time or find the ability to explain to people why it makes sense and create the culture in which everybody does it because they understand why it’s important.

‘If you build a culture, it becomes the norm and everybody does it.’

But he added that he understood why it is being considered.

‘We are in a pandemic and so things sometimes get done differently,’ he said.

The six-week consultation process will take views on whether vaccine requirements should apply for health and wider social care workers — those in contact with patients and people receiving care.

It would mean only those who are fully vaccinated, unless medically exempt, could be deployed to deliver health and care services.

The Government previously said all staff in registered care homes in England must be vaccinated against Covid from November 11, unless medically exempt.

A government source told The Times: ‘It’s only right that those who are caring for people who are particularly vulnerable to coronavirus should be vaccinated. This will save lives.’ They added that Boris Johnson had personally backed the plan for mandatory vaccination for NHS workers.

Vaccines minister Nadhim Zahawi said on Sunday the move was ‘right and responsible’ as NHS staff looking after vulnerable patients have a ‘duty of care’ to get inoculated.

But Chaand Nagpaul, chair of the Council of the British Medical Association, said in June that ‘compulsion is a blunt instrument’ and that implementing a blanket rule would ‘raise new ethical and legal implications’.

The Scientific Advisory Group for Emergencies (SAGE) Social Care Working Group has already advised the overlap between the sectors makes a strong scientific case for there to be similar approaches to vaccination.

The Department of Health and Social Care (DHSC) said the consultation would focus on the proposals, their scope, and any potential impact mandating vaccines could have on staffing and safety such as reducing staff sickness absence.

The process will also seek views on whether flu vaccines should be a requirement for health and care workers.

Findings will then help inform decision-making around how the mandate could be implemented and who could be exempt.

Staff, healthcare providers, stakeholders, patients and their families are being urged to take part, with a final decision expected this winter.

According to the DHSC, around 92 per cent of NHS trust staff have received one dose of a Covid vaccine, with 88 per cent of staff having received both doses.

However, the DHSC says new data shows uptake rates between NHS trusts can vary from around 78 per cent to 94 per cent for both doses.

National flu vaccination rates in the health service have increased from 14 per cent in 2002 to 76 per cent last year.

But in some settings, rates are as low as 53 per cent.

Health Secretary Sajid Javid urged all health and social care staff to be vaccinated, regardless of the outcome of the consultation.

He said: ‘Many patients being treated in hospitals and other clinical settings are most at risk of suffering serious consequences of Covid, and we must do what we can to protect them.

‘It’s so clear to see the impact vaccines have against respiratory viruses which can be fatal to the vulnerable, and that’s why we’re exploring mandatory vaccines for both Covid and flu.

‘We will consider the responses to the consultation carefully but, whatever happens, I urge the small minority of NHS staff who have not yet been jabbed to consider getting vaccinated — for their own health as well as those around them.’

The care industry has previously expressed concern over the effect mandatory vaccination may have on the sector’s already-stretched staffing levels.

Last month, the Institute of Health and Social Care Management (IHSCM) surveyed more than 1,000 care managers in partnership with the PA news agency.

The survey found that nine in 10 managers said their workplace was experiencing staff shortages or having difficulty recruiting.